Escape to the coast

Built in coral stone and mangrove timber, the town is characterized by the simplicity of structural forms enriched by such features as inner courtyards, verandas, and elaborately carved wooden doors.
Lamu has hosted major Muslim religious festivals since the 19th century, and has become a significant centre for the study of Islamic and Swahili cultures.

The town of Lamu began life as a 14th century Swahili settlement, but the island has seen many visitors and influences, including Portuguese explorers, Turkish traders and the Omani Arabs.
All left their mark, but Lamu developed its own particular culture, which has ultimately endured.
Lamu’s narrow streets remain unchanged, and in the markets and squares around the fort life moves at the same pace as it always has.

There are no vehicles on this island, and the donkey and the dhow remain the dominant form of transport.
The people of Lamu are great believers in tradition and custom, and this is a strong society built on a respect for the past.
For the traveller, Lamu is a hypnotically exotic experience, made even more enjoyable by the relaxed and welcoming attitudes of the locals.

Shanzu beach is located 30km from Mombasa, off Mombasa-Malindi Highway. The beach is surrounded by coconut palm groves and has several beach resorts and hotels, bars and restaurants, where visitors can lodge, enjoy and have fun during their holidays.

The beach offers pleasant views of the sea, sheer beauty of the coast and endless water spots. It is a perfect place for a tropical beach vacation; it provides a variety of adventures that give visitors remarkable experiences. 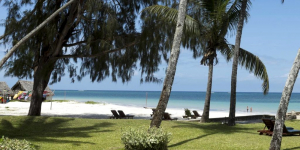 Vipingo beach is located near Kilifi in a coastal area which consist of Swahili villages.

Surrounded by greenly vegetation of coconut palms, the water is calm and crystal clear.
The beach is scenic but it’s always isolated with very little crowd. If you would love to spend some peaceful and romantic time with your lover or friends, Vipingo beach is the best place to visit. 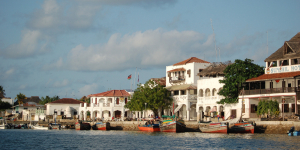 Lamu Island is full of beautiful white sandy beaches, which are perfect for ultimate relaxation during vacation. Manda Bay and Shela beach are the most popular beaches in Lamu. These beaches are known for their picturesque views and peaceful ambiance.

These beaches are surrounded by luxury resorts built around the ocean. These beach resorts offer visitors an exquisite place to have fun and relax during their holidays. 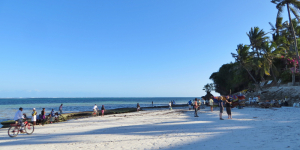 Located in the white sandy beaches of Mombasa, the proud, legendary and lavish, Nyali International Beach Hotel & Spa is an icon with a unique history and social significance which has returned with its timeless grandeur and new and contemporary spirit.
Our accommodation facilities and restaurants are inspired by the original art and provide the guest with an experience that is truly indulgent and exquisite. 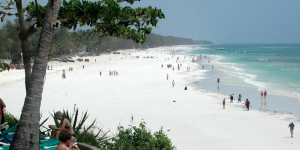 Bamburi Beach offers a picturesque stretch of sandy beach with a good number of top class hotels and resorts lined up facing the blue waters of the Indian Ocean. The beach is located in close proximity several town attractions.

Diani Beach is a major beach resort on the Indian Ocean coast of Kenya (in eastern Africa). It is located 30 kilometers (19 mi) south of Mombasa, in the nearby Kwale County.

The beach is about 10 kilometers (6 mi) long, from the Kongo river to the north and Galu beach to the south (the southern point of reference is an old Baobab tree). It is adjacent to the town of Ukunda, the population of which nears 100,000 inhabitants. A small airstrip is located between the beach area and the Mombasa-Lunga Lunga road.